MAMA Academy volunteer Catherine has written about the loss of baby Isaac for our #stillBORN campaign this Baby Loss Awareness Week. Read more about our campaign.

I went into labour with our first child on the 5th January 2009 at 41 weeks after an easy textbook pregnancy. Our Christmas baby was finally coming and we were so excited! It was snowing that morning; I remember so clearly gazing out of the window and thinking how nice it would be if he was born on a snowy day.

After spending the day at home managing the contractions, we went to the hospital at 5pm. They did all the usual checks, but because everything was normal they sent us home. Several hours later at 11.30, we visited the hospital again. A midwife used the Doppler to check our baby’s heartbeat, except this time she couldn’t find it. Alarm bells started to ring immediately, they had never struggled to find his heartbeat before. After what seemed like a lifetime another doctor arrived with a scanner and confirmed what we already knew, our baby had gone. Just hours before we had been told what a strong heartbeat he had. It’s a blur really, but I can still hear the wails that came from me.

We were taken to a room to continue our labour. I remember the heart-breaking calls that Michael had to make in the middle of the night to our parents and the ongoing contractions that just felt pointless. The midwives were amazing. A midwife that had seen me at our GP’s earlier that week came to see us and eventually delivered our baby. When I look back now, we were incredibly calm. It was like an out of body experience looking down and watching someone else go through it. I suppose it’s the only way to get through the horror. 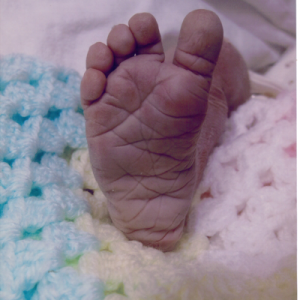 Our gorgeous son Isaac William was born weighing 8.9lbs on the 6th January 2009 at 7.37. He was absolutely perfect, with a head of dark hair and chubby fingers. Our families came to the hospital to meet and hold him. My dad’s tears said it all – I had never seen him cry before. As everyone held him, you could see them gently rocking like you naturally do when you hold a baby. I’m so glad everyone got to meet him. Michael got to dress him in his tiny baby grow and the midwives took photos and footprints.

It wasn’t enough time but no amount of time would have been enough. How can you fit a lifetime into hours?

The midwives eventually took him away in his little Moses basket. I was in the bathroom when they took him out of the room. To this day I regret not watching him leave for the last time but at the same time, I just couldn’t. We saw in the morning in silence, with broken hearts and dreams. Leaving that hospital with an empty car seat and a death certificate instead of our baby will stay with us both forever.

Returning to our flat, Michael took on the task of letting everyone know. I don’t know how he did it; he was my rock. He emptied the nursery with my Dad as I lay on the sofa with no idea how I was ever going to function again. For five weeks we spent most of my time at my Mums or walking, either the streets around our flat or at Richmond Park. It was the only thing that momentarily cleared my mind. His funeral was beautiful, a small service by his grave with poems read by family.

One of the first times I ventured to the local shops we bumped into a couple from our pre-natal group. It was like an enormous kick in the stomach. It was the first of many awful conversations where people had no idea what to say.

Weeks later at his post mortem, the Consultant told us that Isaac had probably died because of an infection. They were unable to tell us what type of infection it was or how it would have got in utero because my waters had never broken properly. As we left the appointment, the Consultant reassured us that next time the outcome would be different. I felt reassured but angry – why did Isaac not get to live, why did he not get to open his eyes, why did he not deserve a different outcome? I had a textbook pregnancy; I didn’t really blame the hospital. I don’t think they could have done anything differently, there were no signs, yet I had to feel angry at someone. I do often think that if he had just come early or on time, he might be with us now. 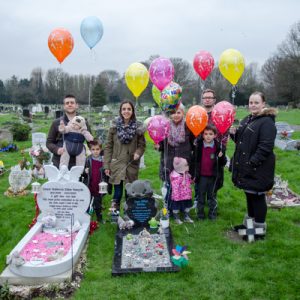 In the next year, we slowly learned to live again. I returned to teaching, something I couldn’t imagine doing in the early days. To begin with I would stare at children and just imagine what Isaac might have grown to look like. I would hold it together all day and then cry all the way home in the car. We got married and moved house. Happy moments, but tinged with a huge sadness that he wasn’t there. Our family and friends were amazing and we are so lucky to have them. They, along with us, will never let the world forget our little snowflake.