After more than 2 years of trying, in June 2011, my Fiancé and I were delighted to find out we were expecting our first baby. I had a rather uneventful pregnancy leading up to the end of my 38th week of pregnancy.

I was concerned about my baby’s movements, so we rang the ante-natal unit at the hospital and were told to come straight away. We were put in a room and the midwife who greeted us was going to hook me up to the monitor (CTG). After a few minutes passed she came back, she had decided that she wasn’t going to hook me up to the monitor and that she will check my baby’s heartbeat instead. We could hear his heartbeat, I was reassured, as the midwife assured me that baby’s movements slow down towards the end of pregnancy.

I now know that a baby’s movements do not slow down towards the end of pregnancy, and that the heartbeat is not a true indication of whether or not a baby is in distress. Ten months after Ethan was born, after we had made a complaint regarding the quality of care we had received that evening, we had a meeting with my consultant and the head of midwifery, we were asked whether the midwife we saw that night had advised us to come back within 2 hours if I was still concerned, I told them no, the midwife that saw us that night said that she will see me when I’m ready to give ‘birth’. We were then told that the midwife hadn’t followed the correct procedure when dealing with my concerns with reduced movements.

I put my trust in the midwife, that she knew what she was talking about, so the following few days, I could feel what I thought was movements, but not as strong as they once were. I had an appointment with my community midwife, a few days later and naively thought everything would be ok. 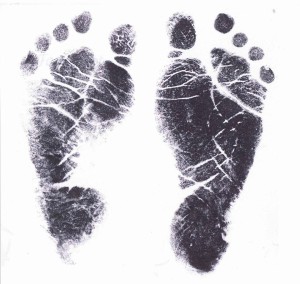 On the 28th February 2012, a date forever etched in my memory, I went to my routine appointment, as usual she checked the heartbeat with the Doppler, there was nothing, we could hear the placenta but no heartbeat, she got me some water I drank that, still no heartbeat. She rang the hospital and I was told to go up straight away, I rang Robert and he came out of work to take me up to the hospital, he was being optimistic and saying he’s probably hiding, I knew something wasn’t right. We got to the hospital, we were put in a room and again, the Doppler came out, still no heartbeat. So we had to wait for a little while for a scan, they scanned me and the sonographer said those words, no parent ever wants to hear ‘Sorry, there is no heartbeat’. That’s when our life as we knew it changed forever, I could feel my heart sinking in hearing those words.

I had another scan a little later on that day, to confirm what we already knew, I didn’t want to look at the screen when she asked me, the last time I saw him on the scan, was when his heart was beating, I wanted to keep that memory with me, and Robert felt the same way.

After lots of blood tests, family came and went, I was given a tablet to help the induction process, we were then put in the bereavement suite, we were able to go home that night or stay, we chose to go home, in a way, we saw it as one last night in our home with Ethan. We were told to return the next day (29th Feb) as that’s when they were going to attempt to induce me. The induction didn’t work, so I was given the hormone drip 2 days later, I was allowed an epidural, we were taken to the delivery room and on the 2nd March 2012 at 7:34 pm, weighing 7lb 11oz, our beautiful, sleeping angel entered the world. 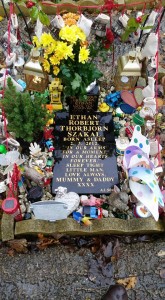 He was perfect, even the midwives commented on how well ‘grown’ he was. He stayed with us that night in the bereavement suite, I didn’t want to let him go. Family came the next day to meet him and to say goodbye. We ‘kept’ him as long as we could, but as he started to deteriorate, we knew we had to say goodbye ourselves, then we went home, to a quiet house, baby items dotted around the house awaiting his arrival. A reminder of what should have been.

We chose to not have a post-mortem, although they cannot confirm, Ethan was born with his cord wrapped around his neck several times, this I truly believe is what caused his heart to stop beating, as the results from the placenta came back fine.

We have since been blessed with another little boy who was born in Feb 2014, but that doesn’t take away the pain of losing Ethan, he will always be our first born and he’ll never be forgotten.