Arthur was our miracle baby – conceived on our 4th and what I felt would be our final round of IVF. I was so convinced the treatment would be unsuccessful again that I read the first pregnancy test result wrong. But pregnant I was – it had finally happened. I spent the first few weeks feeling fairly anxious as I knew the rates of miscarriage in early pregnancy were high and having conceived through IVF didn’t change that. But gradually as the weeks progressed I felt more settled and allowed my excitement to build. We found out we were having a boy which made it all the more real as we could talk about ‘he’ and start to kit out the nursery in blue. Everything was proceeding without a hitch as I counted down the days to my maternity leave starting at the end of January 2016.

It is very painful to remember those final days of my pregnancy. I still have to quiet the ‘what if’ questions and try and hold on to what I have been told – there was nothing I could have done to change things. I had my 36 week check with my midwife on the Wednesday. She felt he was measuring a little small so booked a growth scan for the Friday. This twitched me a bit and in my heart of hearts looking back I think I already knew something was wrong, only from that morning. Something felt different but I couldn’t or wouldn’t put my finger on it. On the Thursday morning I knew I had to get things checked out – he was definitely not moving as he had been. We went to triage and our worst fears were realised – there was no heartbeat. Our beautiful baby had died. The anguish that descended at that moment was terrible – complete shock and disbelief. I just lay there saying over and over ‘What are we going to do?’ – it was as if I couldn’t conceive how I was going to carry on. 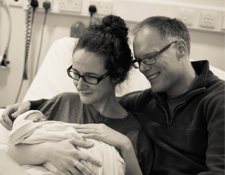 But carry on we had to, somehow. The staff at the hospital were so kind and explained what would happen next – how I would be induced and give birth, that there was a dedicated suite where we could stay and spend time with our son. I was given some medication and then we went home to wait for the labour to start. It all happened quite quickly in the end and just over 24 hours later we were back in delivery suite where at 1:06 on the afternoon of Friday 5th February our gorgeous boy was born. Arthur Pickle, weighing 6lb 4oz. Pickle had been our bump name for him and when it came to naming him we found we couldn’t let it go.

We spent 29 precious hours with him at the hospital. All our immediate family met him. I was able to wash and dress him. We spent hours just holding him and looking at him, stroking his soft nose and wrapping his little fingers around ours. We have lots of photos of him, a lock of his hair which I wear every day in a necklace and his foot and hand prints. Leaving the hospital without him was one of the hardest things I have ever had to do – I felt so bereft.

And now it is a year on and we have just marked his first birthday. It has not been the year we dreamed of but it has still been a year full of love. We have had to learn how to be Arthur’s mummy and daddy without him in our arms. We have been able to show our love for him in different ways – through creating a garden for him where he is buried, through fundraising, by writing his name in the sand and collecting heart shaped stones in his memory. We both feel completely changed by the experience of having and losing Arthur. He will always be part of our family.